We are at the tail end of the storm now and I think it’s safe to say that we made it through just fine.  This was a big test – it’s the first storm since we brought the horses home and got the chickens.  My biggest fear was that the power would go out with the high winds we’ve been experiencing but so far, so good.

We ended up getting 25-30 inches of snow.  It’s hard to tell, because it has been so windy that it has drifted everywhere.  Tomorrow we will start digging out.  The work that Gator did last night was futile but at least he had fun – he’s like a kid with that tractor!

Speaking of having fun, nobody had more fun than those two dogs of ours.  They couldn’t get enough of it! Between Gator and I, they went out with us at least 6 times today.  Not to mention the couple of times Carly went out on her own – although that didn’t last long since there was nobody to play with her. 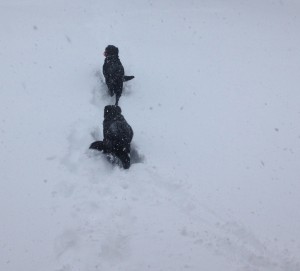 Good thing they’re black – makes them easy to find in the snow.

The horses were perfectly happy in the barn.  They slept most of the day.  I imagine they will be ready to get out and play tomorrow.  That will take some work – every door on that barn has a big snow drift up against it!

The chickens fared well too.  We put a tarp up around two sides of the coop to keep the snow from blowing in.  The chickens really didn’t like that and Gator found two of them huddled in a corner as far away from that tarp as they could get.  Once he picked them up and put them in the hen house though, they stayed put.  I put a little food and water in there with them and they seemed comfortable.

I hope everyone else who’s had to deal with the storm has been able to stay warm and safe!

Hang in there – spring is coming!