I recently read an article about how people on social media have a tendency to brag (ad nauseum) about all the positive things in their lives and never mention the negatives.  I have certainly seen that, so lest you think it has been all fun and games here at Glenmore,  we do have our struggles.  There are many different terms to use for what I am about to describe but here at Glenmore, we like to call it the “sucking vortex.” A sucking vortex occurs when you start a project and realize you can’t proceed any further because you have to do something else first, which can’t get done until you do something else first, and so on.  Pretty soon, you are so far down the chain, you can’t remember what the original project was.  We seem to be encountering the sucking vortex an awful lot here lately, so I thought I would share the latest example.

Virginia is known for its beautiful horse farms with rolling  pastures surrounded by 3 or 4 board oak fences. 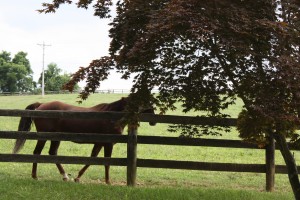 Fencing is incredibly expensive, and for horses it’s even worse.  As we started to price out having oak board fencing put in, we quickly realized that this project could easily end up costing as much as building the barn.  So, being the kind of people who are never afraid to tackle a project, Gator suggested we build it ourselves.  We knew we were taking on a lot and I will admit, this was strictly a financial decision – we really didn’t need another project. Knowing the high expense and maintenance of board fencing, we decided to look for alternatives and found a great coated wire system that is cheaper, safer for horses and easier to install.  OK, we were making progress!

Next we had to figure out how to drill the post holes.  Most fencing contractors use either a skid steer with an auger or a pole driver.  We could rent either one but  if we did that, we would need to be able to drive all the posts in one day.  Hmm,  this could get expensive quickly.  And if we did rent, we wouldn’t have what we needed to add posts later on.  We do however have a tractor – and you can get auger attachments that work very well for less than it costs to rent equipment for a day.  So off the to equipment auctions we went to find an auger for the tractor.  Do you see where this is going?  After several weeks of shopping for a used auger and finding only overpriced junk, Gator finally went down to the farm store and bought a new one.

Back in business – we ordered the posts and had them delivered. 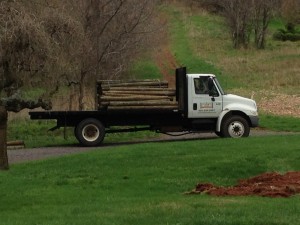 The next discussion was about painting.  Do we paint the posts before or after we set them?  I have done my fair share of  fence painting and I voted to paint the posts before we set them.  They would last longer if the part that is in the ground is painted and we could lay them across a couple of saw horses and knock them out in no time.  Here comes the sucking vortex again!  Although we don’t need nearly as many posts as we would if we were going to do board fencing, they do need to be bigger.  I was shocked to learn how heavy an 8 ft long 5-6″ diameter post is.  I can’t even pick one up.  Gator can, but if we were going to move very many, it would definitely take two of us.  No wonder why the delivery truck had a lift and just dumped the posts all over the  ground!  Somehow we had to get the posts stacked and figure out a way to get them up off the ground to paint them.

Gator to the rescue!  Let me just say right now – I married a process genius.  Here is the plan he devised. 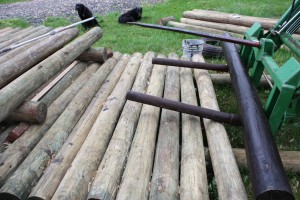 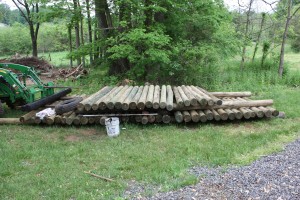 There was no way around it, we were going to have to stack all the posts once.  We laid two posts lengthwise on the ground and then stacked posts crosswise on top and then made another layer on top of that.  Then Gator found an old piece of pipe and cut it in half to fit on the bottom forks of the hay spear attachment on the tractor.  He got on one end of each post and I got on the other and we painted and rolled the post as we went.  When we finished, we rolled each post right on to the newly rigged hay spear.  When we had a load, he took them over and stacked them where they could dry. 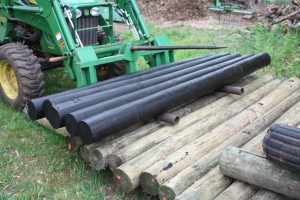 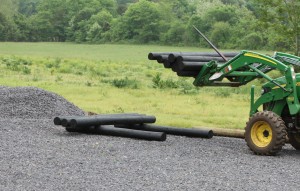 The fence posts are now ready to be set.  One more sucking vortex conquered!

This is our busiest time of year at work and it has been really hectic the past month or so. Although I feel like I spend every waking moment at work (and Gator works way too much) , we are still managing to get some things done around the farm.

I ordered some laying hens from the local co-op and they came in a couple of weeks ago. They are still too young to lay eggs, but hopefully they will start laying in the next month or two. We are lucky to have a coop with a hen house already built, so at least we didn’t have to deal with that.  We did do some reinforcing around the bottom of the pen to discourage predators.  We know we have a raccoon in the area and we have heard they are very persistent about getting to the chickens.  We also have motion detector lights around the outside of the building – hopefully they will fend off the riff-raff! 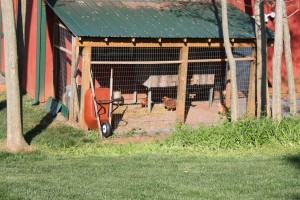 The chickens didn’t know to go into the hen house at night, so we’ve been going down there at dusk and putting them to bed for the evening.  Three of the four have figured it out now, so the last two nights I’ve only had to put one in the hen house.  The good thing is that they are getting used to being handled and they no longer run away when we try to pick them up! 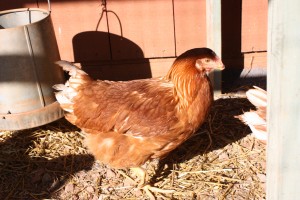 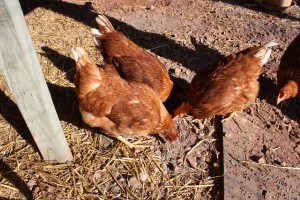 I would love to be able to get to the point where I can let them out into the yard during the day. Their coop is plenty big but it would be nice for them to be able to get out, roam around and eat bugs and things in the yard. I’m not so sure that is going to work out, though.  A certain black lab is way too fascinated with them!  I’m don’t know if she would intentionally hurt them, but she loves to chase everything and I really don’t want to take a chance that she would catch one.  Oh well, that’s not a decision that needs to be made now.  Maybe she will lose interest in them over time (hah!).

I am starting to be able to tell them apart.  They look very similar, but one has a few more white tail feathers than the others, one is a little darker and another is a little redder than the rest.  I’ve been trying to come up with names for them.  I was thinking about an Old Hollywood theme – maybe Ginger, Audrey, Doris and Marilyn.  Any suggestions?