We’ve had a very successful summer with the bees and now we are preparing them for winter.  After last winter’s losses, we are trying to be more proactive by getting the hives to the right size and configuration to give the bees the best chance to survive the winter.

Things got off to a bumpy start last spring.  We got both hives set up and when we checked on them a few days later, 90% of one hive moved over to the other hive.  Not really sure why that happened, but the queen stayed behind and there were enough worker bees to feed the brood, so although the hive was a little slow getting going, it managed just fine.

The other hive just went gangbusters from the start!  We had frames with honey and comb on them from the previous hives, so we put them in the new hives to give them a head start and it really seemed to work.  Before we knew it, we had five boxes and more than enough honey to sustain all of the bees.  We were even able to split the hive and give some bees to a friend who also lost all of his bees over the winter. 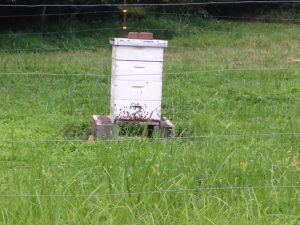 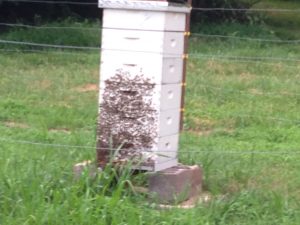 Now that we’re getting into fall, the queen will start laying fewer eggs, so the number of bees will  begin declining.  The lifespan of “regular” bees is only about three weeks, but the bees born later this fall are known as “fat” bees and their lifespan is about three months.

In order to keep the hives strong, we did a mite count and found that there were a few mites in the hive. In previous years, the regional bee experts recommended that first year hives not be treated for mites, but due to the devastating bee losses in Virginia last year, it appears that varroa mites are spreading faster, so if there are any signs of mites, treatment is now recommended.  This is kind of a big deal, because one of the concerns with bees is the use of pesticides – and what to we use to treat for mites? Pesticides.  It’s funny how I’ve changed my philosophy about the use of pesticides in the hives.  Last year I was completely opposed to the idea.  Then both hives died.  We’re pretty sure it was a combination of things that caused it but there were definitely mites in the hives and that weakened the colonies.  Suddenly, I’m more open minded about the whole idea.

In addition to treating for mites, we are also consolidating the hives.  This is another new idea for us this year.  As new beekeepers last year, we thought that you had to get the hives as big as possible so that they had the best chance of getting through the winter.  What we’ve discovered is that’s not necessarily true.  We want good sized hives, but knowing that the populations are starting to decrease, what we want to do is consolidate the hives so that when the cold weather comes, they will form a tight cluster so that they can keep the queen and the brood warm.  This is the other thing that we think contributed to the decimation of last years hives – the hives were too big and the food was too far away, so when we had an extended cold period, the bees couldn’t get up to the honey at the top of the hive and then all they way back down to the cluster before they died from cold.  So to remedy this, we are taking the honey off the top of the hive and leaving the honey that is in the lower boxes.  We are also taking off the empty boxes at the bottom of the hive.  For some reason, during the summer, the bees move upward in the hive and leave the bottom boxes empty as they go.  Now we will have the hive consolidated in the lower boxes with honey right there near the cluster, so they don’t have far to go to get food when it gets cold.

We certainly have learned a lot this year with our second attempt at raising bees.  We have also learned that things change every year, and what worked last year may not apply this year.  Hopefully, our busy little bees will have a successful winter and will come back strong in the spring! 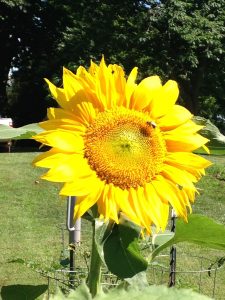