We lost our horse, Bob, last week.  He left us the same way he came here into our lives – with a jolt.  This post is not going to be about losing him though, it’s about how he managed to work his way into our hearts and bring such joy to our lives in the short time he was with us.

Bob’s previous life was very different from life here at Glenmore.  Not to say that it was bad – just different.  In many barns where there are show horses, they are not allowed to be turned out in groups.  Horses either take turns getting exercise in a small field or lot for a couple of hours a day or they are kept in stalls and are ridden daily.  We are much more casual about things.  My philosophy is to let horses act like horses as much as possible.  That includes turning them out together.  Bob was thrilled to have buddies to go out with!  He had never been turned out with another horse before.  What he didn’t know was that there is a pecking order and he was at the bottom.  Banjo and Max made a point to put Bob in his place.  Bob, however, didn’t care.  He was happy to be at the bottom of the pack and although he didn’t know any of the rules in the beginning, he was a quick study and before we knew it, he was just one of the guys. 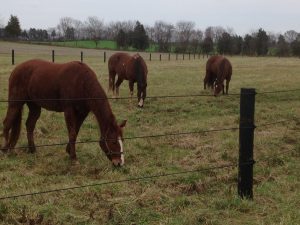 Another thing Bob didn’t know a lot about was ground manners.  I am really a stickler when it comes to  horses behaving well when they around people.  I expect them to stand still and put their heads down for me to put their halter on and walk quietly beside me when I am leading them.  Bob didn’t have a lot of experience when it came to ground manners – in fact, he had never even had his halter taken off!  That first couple of weeks, I felt like he was constantly jumping on me and pushing me all over the place. One of Bob’s best qualities, though, is that he wanted to be a good horse and when he knew something was expected of him, he did his best to figure it out and get it right.   And figure it out, he did.

Bob was a favorite of the dogs too.  He had never been around dogs prior to his life with us.  At first he was a little intimidated by all of the commotion.  It would never occur to the dogs that a horse might be unsettled by having the two of them running around his legs.  Once again, Bob being the quick study that he is,  figured out that the dogs were great company and they loved to hang out with him.  In return, Bob “fed” them.  His stall had a open spot in the bars to make it easy to pour feed into the bucket.  Bob would take a mouthful of feed and stick his nose through the hole and spit some of the feed out while Kody and Carly would wait to catch it outside his stall.  It was a win-win for everyone!

My favorite thing about Bob was that he was extremely social – and very outspoken.  Every day when we would go down to the barn, as soon as  Bob could hear us coming, he would nicker.  If it was breakfast or dinner time, he would tell me.  He would carry on a regular conversation with me.  And not just me – if I would have one of the other horses out, as soon as we got back in the barn, Bob would nicker a welcome back to them.

The barn is quiet these days – it’s hard getting used to that.  It took several days before the dogs quit standing under Bob’s stall waiting for him to feed them.  Banjo and Max still look into Bob’s stall like they are waiting for that welcome nicker when they come into the barn.

Bob, we will miss you so much more than you can ever know! 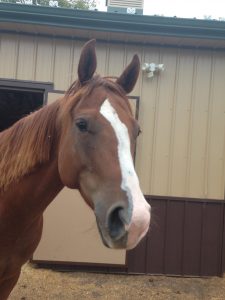