As you may have gathered, we have gone a little crazy with the projects here at Glenmore.  In our defense, this was not a horse property when we bought it and that’s what we really needed, so a lot of these jobs have helped to make it one.  We have cleared out overgrown land, built a barn, fenced in pasture and built an arena.  The arena is really great, but I have hesitated on putting a fence around it.  There are a lot of good reasons for having an open arena, but it is also nice having a fenced in area to ride or work a horse from the ground.  The solution, we decided, was to put in a round pen.

Oh great – another project.  Although I have a habit of making anything horse related a high priority, I have been able to work the horses just fine without a round pen, so it was low on my list – too many other things I want to get done.  Gator, however, had other ideas.  Once we decided on a relatively flat place to put it, he started the dirt work  like a man obsessed.  He spent several weekends scraping and moving dirt, making sure the spot was perfectly level.  Around the middle of September, he told me he had gotten a great deal on  the round pen that our local co-op was using as a display, so that was his birthday present to me.  OK, well that explains the rush since my birthday was just a week away. 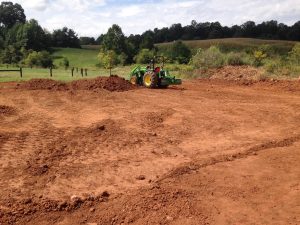 Now just to explain a little, this particular round pen is only about 57 feet across.  Although we have worked in many round pens that aren’t on level ground, it is a fairly tight circle for a horse to canter, so the more level the ground can be, the better.

However, I was not prepared for what I was going to hear next – we need a retaining wall.  Remember one of my previous posts about the sucking vortex?  Well here we go again! As he was walking it off and showing me what he had planned, my head began to spin.  This wall was going to be almost 100 feet long! Did we really need all of this?  Gator calmly explained that if we were going to do it right and have good drainage so that the water wouldn’t puddle in the middle of the pen, this was the only way to go. Before I know it, a huge truck pulled up with six pallets of cement blocks. 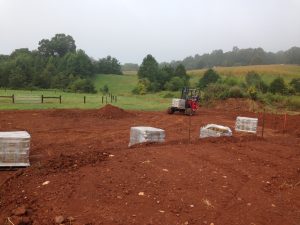 Normally, Gator and I work together on big projects like this, but this time things were really busy at my job I and had to work several weekends, so for the most part, he was on his own.  With several weekends of interruptions with rain and company coming to visit, Gator finally got the wall finished.  I must say, it’s beautiful! 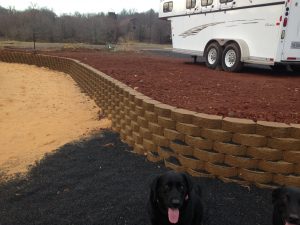 Once the wall was done, it was just a matter of having sand hauled in and getting the round pen delivered and set up.  Two months later, I have a first class round pen that is level and won’t get washed out when it rains! 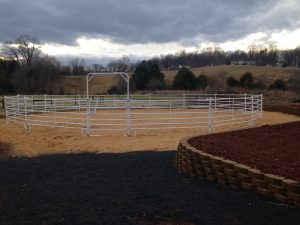 That Gator – he really knows how to win my heart!

In this part of Virginia like many other states, late fall is the beginning of hunting season. Many weekend mornings, we wake up to the sound of gun shots from deer or goose hunters in the distance and Kody cowering in the closet.

That’s not the only hunting going on around here though.  Fox hunting is huge in this part of the country.  Now for those of you not familiar with fox hunting, there are no guns involved.  A whole bunch of people get together and  ride their horses all over the countryside following a pack of hounds that are chasing a fox.  Usually the fox gets away but after several hours of galloping through fields and jumping fences with a bunch of other people on horses (some in more control than others), anyone that survives couldn’t care less about losing the fox.  They are so happy to have come out unscathed, they just want to party – and party they do!  After the hunt, they have huge champaign brunches out in the field.  It’s as much about the party afterward as it is about the actual hunt.  There are a few deer hunters I know that can relate to that!  I don’t want to make fox hunting sound uncivilized, though.  It is a sport that is filled with rules and traditions.  There is a very strict dress code for both riders and horses, as well as etiquette and protocol that must be followed by members of the hunt clubs and their guests. 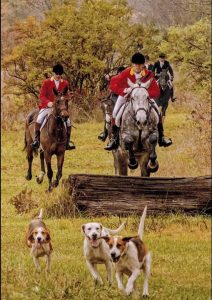 Another kind of hunting going on in this part of Virginia doesn’t involve animals.  It’s the Civil War artifacts hunting that club do after the harvest.  In this neck of the woods, farmers don’t till the soil after they cut the corn, soybeans, or other crops.  They often plant rye grass over the winter which prevents erosion and keeps the weeds down.  That leaves a short window of only a couple of weeks when there is bare ground.  During that time, people can play a flat fee and come in for a weekend with their metal detectors and hunt for Civil War treasures.  Since the farms all around this area were either the site of battles or encampments, there were a lot of relics left behind that have been buried over time and seem to keep working their way back up to the surface. 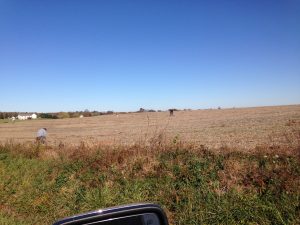 Now we don’t get a lot of traffic out here, so when a hundred or so people descend on on farm at daylight on a Friday morning, it creates quite a traffic jam!   I was coming home from the gym a few weeks ago when a whole caravan of cars and trucks pulled out of one of the local hotels and drove to one of the neighboring farms.  It took me a while to figure out what was going on, but once I did, I went over there and got some pictures. 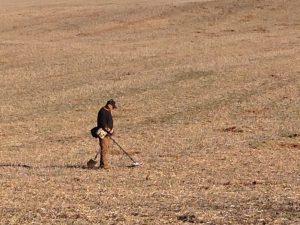 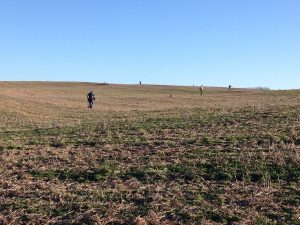 After a couple of days, they all pack up and go, leaving the fields looking like they are full of prairie dog holes.  In a few weeks, the grass has filled in and there is no sign that anyone was ever there.  Just in time  for deer and goose hunting seasons – I sure wouldn’t want to see all of these people out in the fields with hunters shooting guns all around them!