The Birds and the Bees

We’ve had some interesting experiences with birds over the past several months. One is the injured buzzard that has been living in the old dairy barn just across our property line. We noticed it out on the dirt road that runs through the farm last fall. It would flap around but never could get off the ground. Then after the corn was cut down, we would occasionally see it out in the cornfield. I thought this was one of those cases where after a week or two, Mother Nature would take its course and either a fox or some other critter would be able to take advantage of  the buzzadrd’s inability to fly, but it has managed to find food and keep safe all winter. I guess they don’t call them tough old buzzards for nothing! 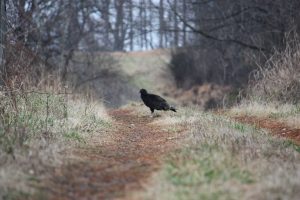 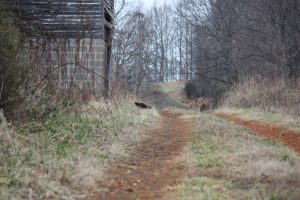 We have also been seeing a pair of bald eagles flying around. Of course they never seem to make an appearance when I have my camera handy.  I did get one quick picture with my cell phone one day, so this is the best I’ve been able to do. 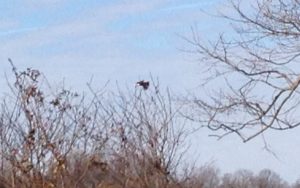 Hopefully they will hang around and I’ll be able to get some decent pictures. I have no idea where their nest is but we have seen them in the trees along the creek. I need to do some reading up on eagles – I really don’t know much about their habits. They sure take my breath away every time I see them.

Another interesting bird we’ve come across is a little owl that sits in the middle of the driveway at night. I haven’t been able to get a picture of this one. We’ve only seen it four or five times but all the other owls I’ve seen are BIG. This one doesn’t appear to be any bigger than a robin, only with a head that’s much bigger in proportion to its body.  Once agin, I need to do some reading up on owls, because I don’t know if this particular one is a baby owl or just a little owl. Anyhow it sits in the middle of the driveway and it’s hard to figure out what it is until you get right up on it. It just looks like a rock or some debris in the dark. The first  time we saw it, it didn’t fly up until we were almost on top of it and then it came right over the windshield – oh boy, was that a surprise!

Now for the bee part. I’m happy to say that Gator and I are starting two beehives this spring! This is one thing I have been reading up on.  We’ve been taking a course with the Northern Piedmont Beekeeper’s Association. I must say, there is way more to beekeeping than I ever imagined. Our bees won’t get here until mid-April at the earliest, but we are getting our hives and other equipment ordered, so I’ll keep you posted on how all of this goes.