Getting Creative with Sourdough

For the past 13 years, I have been grinding my own wheat and making whole wheat bread for my family.  When a coworker of mine introduced me to her homemade whole wheat bread, she predicted it would be the best bread I had ever tasted. Boy, was she right!  I went right out and bought a grinder and the rest is history.  There have been very few store bought loaves of bread in those years. 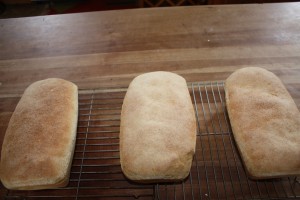 I do love to bake and I especially enjoy working with yeast.  This winter I decided to give sourdough a try.  I may eat whole wheat bread at home, but if sourdough is available when I’m eating out, that’s my choice!  So I went online, ordered a crock and some starter, and made the choice to give the whole wheat a break for a while. 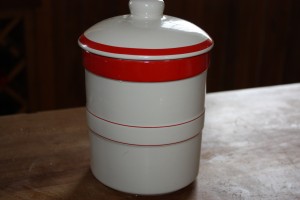 One thing I should have realized about sourdough starter is that you have to feed it every week or two.  In order to feed it, you need to either use it or throw some of it away.  Throw it away???   I can’t do that!  Now that creates a problem.  There are only two of us in this house and in spite of loving it, we really don’t eat much bread.  Two loaves of sourdough bread lasts us a month – not even close to keeping up with the starter feeding requirements.  I had to get creative.

So besides just plain old sourdough bread, I made pretzels to serve as snacks during the football playoffs, 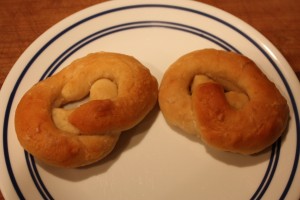 I made pretzel rolls to use as hamburger buns… 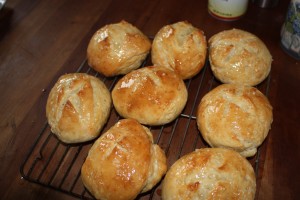 I even tried my hand at making english muffins! 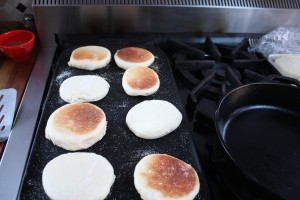 Gator’s breakfast of choice is an english muffin with peanut butter, so they are getting eaten but he’s not even close to keeping up with the supply.  My freezer is filling up with sourdough products.  I’m really having fun with it but I can’t keep this up for long.  Spring is coming and I’ll be moving on to other things.  I’ll probably have to give up on my starter.  The good news is that I’ll have enough sourdough baked goods to last us through the summer!

We’ve been lucky enough to have some wonderful dogs over the years. There have been big and little dogs, all kinds of breeds, both mutts and purebred.

I am a huge supporter of pet adoption. I understand breeding and showing of purebred dogs but our lifestyle doesn’t require a show dog. There are so many dogs (and cats)  in need of homes that when we made the decision to add another dog to the family, we thought a rescue dog would be the way to go.

It seemed easy. We knew we wanted a Lab, so all we had to do was go down to the closest animal shelter and pick out our new dog, pay the fee and bring him home. Not so much. I searched for months. I visited every animal shelter within 50 miles. I combed the internet. I went back and visited animal shelters again.

I will say, until this point I showed great restraint. When we started this process, we had a pretty specific list of what we wanted. Not only did we want a Lab, it had to be a male and he needed to be young but not a puppy.  We had planned the optimal time to get our new dog very carefully – we were now several months past our target date and our lives were getting crazy again. Gator was gone most weeks traveling for work and I was making monthly trips to help care for my parents. We already had a dog, two horses and a kid in college. Life was pretty crazy without adding a new dog to the mix. Still, I couldn’t give up. Once I got it in my head that we were getting a new dog, I just couldn’t let go of it.

Finally one day, a humane society in a nearby town posted a picture of a litter of three puppies that had come in. I had to go check them out.  You know how this goes – I am not afraid to admit I am a sucker for puppies and these were close to what we were looking for.  OK, they were not exactly Labs; they were Lab mixes.  That is a very generic term.  Nobody knew how much Lab and how much mix or what that mix might be.  And they were puppies.  Well, 12 weeks old – that’s practically full grown, right?  At least they were all males.  One for three isn’t too bad!

Need I tell you how adorable they were?  ADORABLE!!  Two were all black and one was black with a white spot on his chest.  I was in love.  Thank goodness Gator was coming home in a couple of days because I couldn’t decide which one I liked best, so I went ahead and got the application filled out and set up an interview.  Now for those of you who haven’t adopted a pet from an animal shelter recently, let me just say that people ought to have to go through a similar process before they are allowed to have children. I won’t expound on that subject any further.

Gator got home and off to the humane society we went.  We even brought our other dog so that she would have a chance to interact with the puppies, hopefully making our decision a bit easier.  One immediately stood out.  He was one of the all black ones and just had that “take me home look” in his eyes.  Gator knew in an instant that was the dog for us.  We passed our interview and paid the fees and a few days later we were able to pick up our puppy.

Our first couple of months were a bit bumpy, but they are a distant memory now.  Kody will be 7 this summer, and what an amazing dog he has turned out to be.  He has his quirks for sure.  He is obsessed with tennis balls.  There is always one in his mouth or by his side.  Heaven help you if you make the mistake of getting started throwing the ball for him.  But I have never met a more grateful dog in my life.  He doesn’t take anything for granted.  Every meal, every treat and every day he lets us know how much he appreciates being a part of our family.  Whether it’s laying on the couch with his head in my lap or hanging out in the back seat of the car while I run errands all day, he doesn’t care.  Other than chasing the ball, there is nothing more important to Kody than being with his people. 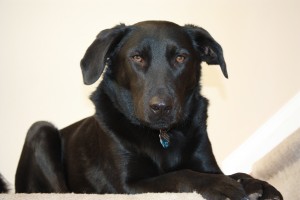 What an incredible rescue!

As we’ve had time to do a little exploring, we have  found a lot of amazing things that were buried (or just left out in a field) and were completely hidden by unchecked growth over the years.  OK, we’ve found a lot of junk too.  Gator has made it his mission to get this place cleaned up and get the junk out of here.  He definitely has his work cut out for him!

Just a little clearing of brush revealed this beautiful rock wall and steps! 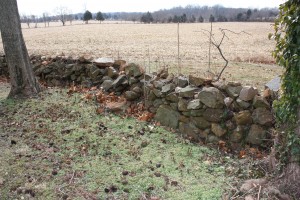 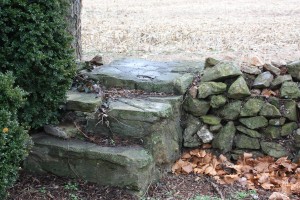 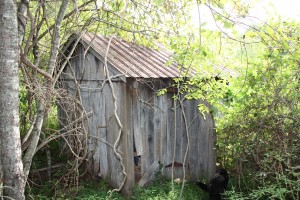 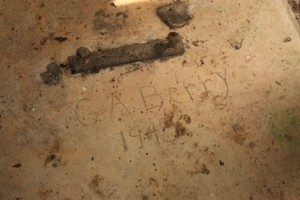 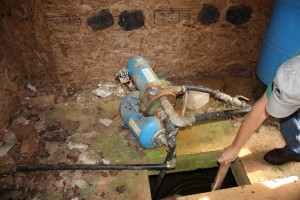 It wasn’t the well for the house but it was probably used to send water to the barns (which are no longer standing).  This project is going to have to be low priority.

Then there are the burn piles – everywhere.  Gator has been taking advantage of the cool weather to get them burned down. 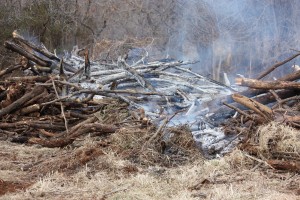 This one had to be moved because it was in the yard and right next to a tree. 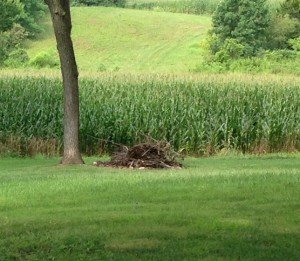 Under it, we found a fountain. 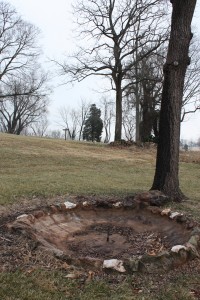 We found another fountain under a different pile. 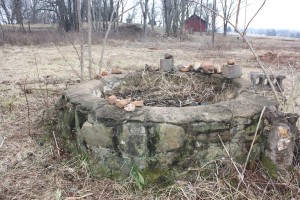 We have found remnants of an old building still standing – it is full of great old barn wood and stacks of flagstone. 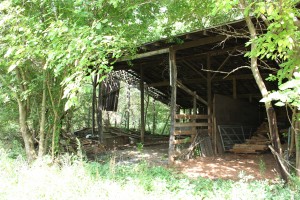 This is the concrete foundation to a building that was buried under several feet of dirt.  It is in perfect condition – not a crack in it! 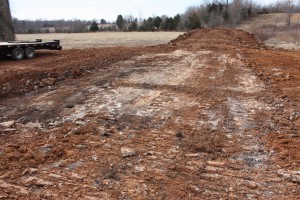 Here’s a pile of old equipment. 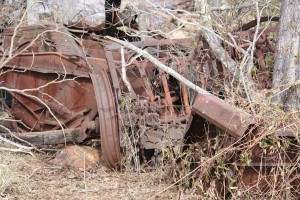 There is an old wagon wheel in there.  If we can get it dug out, I’d like to decorate with it.

I’m sure past owners had no idea some of this stuff was here.  It’s a little overwhelming, but the fun part is finding the treasures among the junk!