Back in the Saddle

Now that spring has finally arrived (kind of), Gator and I are back in the saddle and riding again.  Although our riding is usually significantly reduced during the winter, this year it came to a grinding halt.  Gator’s horse, Banjo, was injured last summer and he wasn’t completely healed until late in the year (see my Silver Linings post from December).  About that time, I was injured and had to take a couple of months off.  By the beginning of March, everyone was certified as fully recovered and we put together a plan to get horses and riders back in shape and out riding again. 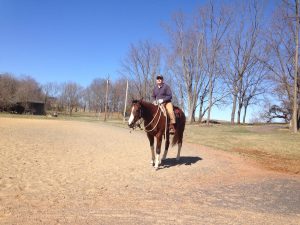 Part of the plan was to go to a ranch riding clinic.  I did a little competing with Max last year and Gator decided that he would like to give it a try this year with Banjo.  Just for the record, we are purely recreational riders.  Nothing fancy going on here.  We both work and have a lot of other things going on, so we don’t have the time to commit to going to more than a few local shows each year.  For those of you who are unfamiliar with ranch riding, it is a class in a horse show where each horse and rider complete a set pattern consisting of about a dozen different maneuvers that show things they would encounter in a typical day on a ranch .  I won’t go into all of the details, but the foundation is having a willing but relaxed horse.  Max is typically very willing but not so relaxed and Banjo is usually relaxed but not always willing.

We signed up for a clinic at the end of March with well known clinician, Steve Meadows, who was hosting a two part clinic that suited both Gator and me.  In the morning, the schedule was the basics of ranch riding – specifically the different gates, then in the afternoon, the plan was to cover a couple of patterns and the things that the judges look for.  We got up early and headed out before dawn to the state fairgrounds where the event was being held.  It was one of those lovely March days where the temperature was in the low 20s when we headed out and as the sun came up, so did the wind.  All in all, it was pretty miserable – and of course, we were riding outside!

The clinic was really good though.  Actually the horses were terrible!  We haven’t hauled the two of them together away from the farm for well over a year, and this was a strange and scary place, so they were hoping to  stay attached at the hip for safety – the exact opposite of what they got.  From the minute we started saddling up they were fussing, so Gator and I decided to separate them as much as possible during the clinic.  Ugh, not really a lot of fun to have not just one, but two sassy and misbehaving horses while we were trying to learn something.  Steve was awesome, though.  As he pointed out, a clinic was the best place for this to happen and he helped us work through it.  By the end of the day, both horses ran through a complete pattern without any mistakes and were well behaved.

We came home with a plan.  I had been separating the horses when they are out during the day, but I usually put them in fields right next to each other for my convenience.  I was more concerned about just having a fence between them so that they wouldn’t be rough housing.  Now I put them as far away from each other as I can get them.  Thank goodness I have four fields to work  with.  They can see each other, but no standing around socializing!  We have also  started riding at separate times, so that one gets to go out and one has to stay home.  It wasn’t very pleasant in the beginning, but it is definitely getting better.  Now that the weather is finally improving, we hope to do a lot more riding this year on willing and relaxed horses! 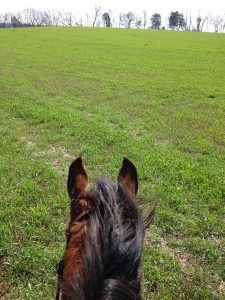