In spite of a cool and dry spring, the garden is doing well. Every year I learn a little more and one of the things I have figured out is to put the work in when I’m planting the garden to make it as maintenance free as possible later on. I detest weeding, so I got landscape fabric down and covered it with straw. This is a huge help, especially in the areas of the garden where the plants are spaced quite a distance apart like tomatoes, peppers and squash. 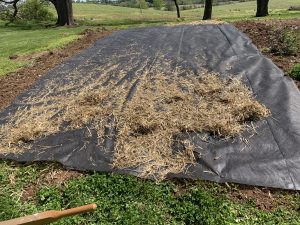 I also laid drip line throughout the entire garden.  Normally, I don’t have to do a lot of watering, but this year I’ve had to water every week.  I had a very intricate layout of the drip line so that every plant would be watered.  The problem is, I used so much line that by the end of it, there was no more pressure and the plants at the end of the line weren’t getting watered.  Who would have thought??  Gator came to the rescue and put a splitter into line about half way through.  Now although I need to flip the switch from one section to the other, at least all the plants get water now!

The work has all paid off though, and we’ve been able to enjoy our cool season vegetables – snow peas, lettuce, spinach, green onions, rhubarb and cilantro.

The warm season vegetables are coming right along too.  We are having some issues with the deer this year, though.  With it being so dry, there isn’t a lot of food available and they figured out that the eating is good in my garden!  Every single one of my tomato plants has had the top eaten off of it. 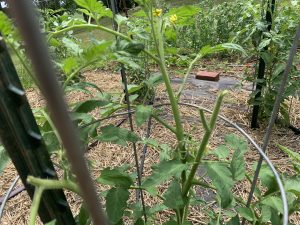 I have worked too long and hard for the deer to get the best of me!  Since I really don’t want the expense and hassle of fencing the entire garden in, I’m going to go with soap.  Soap, you ask?  Yes – deer and other critters seem to detest the smell of Irish Spring soap, so that’s what I’m going with.  I just cut  up a couple of bars and string some baling twine through it and hang it on each tomato cage.  Then I threw a few extra pieces around the edges of the garden for good measure. 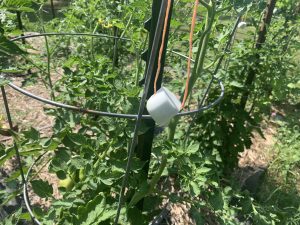 The zucchini is coming in like gangbusters already and I’m trying to get them picked before they get too big.  I feel like I should put a video camera on them to watch how fast they grow – they can go from too small to pick to giant size overnight!  I have been shredding and freezing the big ones to use in baking but it looks like we will be eating A LOT of zucchini in the next several weeks!  The spaghetti squash and butternut squash are also doing well, but don’t seem to be nearly as prolific.  Tomatoes and peppers are only a few weeks away and then I’ll start canning!