Although the last couple of weeks have been extremely hot, we’ve had plenty of rain and  the weather has been good for growing crops this summer. 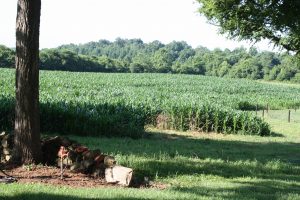 I added an extra garden in my yard this year. Last year, Gator leveled out a spot in the yard and made a really nice garden that gets good morning sun.  It just wasn’t quite big enough though, so when he filled in a low area in another part of the yard that gets a lot of sun, I claimed it for another garden.  I have to admit, I overdid it.  Not only are we getting great growth from our vegetables, the weeds are taking over and I haven’t been able to get them under control.  We did get a lot of spinach and lettuce earlier this summer, and I just picked the first of the tomatoes.  I need to get out there and pick some peppers and cucumbers, so I can’t really complain.

Another thing we’ve got a bumper crop of is poison ivy.  There is a scourge among us!!  As it turns out, Gator is highly allergic and has spent most of the summer fighting a rash as well as the weeds. 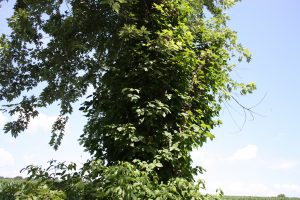 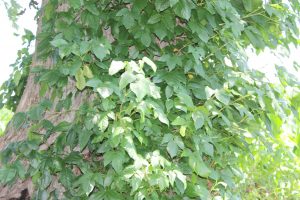 We’ve managed to keep the trees in the yard free from poison ivy, however the trees along the driveway are another matter.  Most are completely covered in it!  Not only the trees, either.  Poison ivy is growing in the pastures as well.  After trying several different ways of killing it, including several homemade solutions – all of which were unsuccessful, Gator finally found a solution which is some type of  a salt mixture and is deadly to poison ivy but harmless for animals.  It takes a couple of weeks for them to die off but once he was able to start killing those nasty vines, he became obsessed with getting them knocked out.  He finally decided he needed a sprayer that had a 25 gallon tank.  Just one more implement in our ever growing inventory. 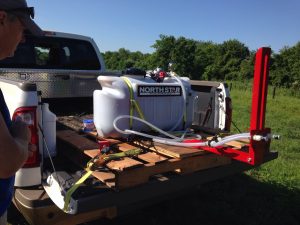 He has made good use of it though.  He mounted it onto a pallet so that he can either put it in the bed of the truck or he can pick up with the pallet forks on the tractor (yet another implement we got this year).  We got the pastures sprayed and we drove up and down the driveway and sprayed every single tree.  The poison ivy has met it’s match!

Wow – it’s been a long time!  Several people have mentioned that they missed seeing my updates, so I will spend the next couple of posts getting you caught up on life at Glenmore.

We spent all of last year doing huge projects like building the barn, clearing land and building fence.  This summer, we are transitioning to smaller projects.  Among other things, we have done some painting, remodeled a bathroom, replanted pastures and had several big trees cut down. 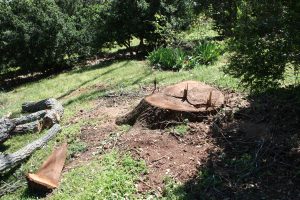 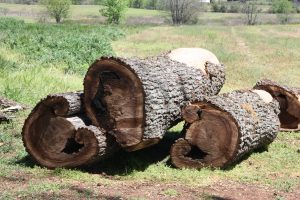 We had one tree leaning over the house, so the insurance company wanted it removed. We also had several other trees that we thought were at risk for falling either onto the house or Gator’s shop.  Don’t let me give you the impression that we cut them down ourselves – we do most of the work around here, but that was too much for us!  As I have mentioned before, most of our trees are between 80 and 100 years old and many of them are hollow and have dead branches.

Phase one of our plan was just to get the trees cut down that were posing a problem – so nine of them came down.  We saved most of the wood that we will burn over the winter in our new heating fireplace (another of this year’s projects), but we were able to sell one section of a walnut tree to a sawmill which managed to pay a lot of the bill to have the rest of them cut down.

We have started growing new trees from seeds that we’ve collected this spring.  In the coming years, we will have a few trees taken down a year and we will start planting the saplings that came from the old trees to replace them.  Hopefully we will have a second generation of trees that will last another hundred years!