I have the most amazing dogs.  There, I said it.  I know everyone thinks their dogs are amazing – and they are.  I just happen to know my dogs better than I know others, so I think they are the most amazing. 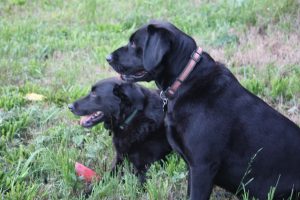 Although they are both black Lab-type dogs (Kody is only part Lab), they are really very different.  Carly, our female, is built like a tank with a low deep bark and is not the least bit feminine.  Kody, our male, is taller but lighter than Carly, and extremely sweet and sensitive.  Carly is obsessed with Gator – she is definitely a daddy’s girl.  Kody is much more of a mama’s boy.

In spite of their differences, those two dogs are extremely attached to each other.   They love chasing a Kong donut (also known as “the squeaky”) that we throw for them. Even though they have similar speed, Kody has always been more of a thinker than Carly, but she has had the weight advantage and has never been afraid to throw it around if it will help her push Kody out of the way to get to the squeaky first.

Normally it is a friendly rivalry.  They both have times when they will back off and let the other take the throw.  However, a couple of months ago, we had a rare but impressive crash.  Both Kody and Carly went for the squeaky at full tilt and they slammed into each other. Kody came out of it limping.  Usually he shakes it off within a few minutes, but this time he was still lame after a couple of days, so I decided to take him to the vet to have him checked out.  Nothing was broken, but he definitely had a strain and is showing signs of arthritis in his back lower legs, so he was put on rest and given pain and anti-inflammatory medicine. 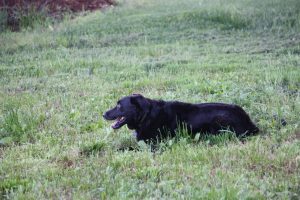 I wasn’t terribly concerned until I heard the definition of rest – it meant NO activity for 6 weeks.  Kody was allowed to go outside to do his business (and even then it should be on a leash), and that’s all.  No running, no walking – theoretically he should be in a crate all of the time.  ARE YOU KIDDING ME???  My vet flinched as I started negotiating with her.  I was pretty sure she didn’t understand – we live on a farm, our dogs go everywhere we go.   There was no way Kody was going to tolerate getting left behind all of the time.  Actually, I think she understood just fine – everyone around here lives on a farm.  We finally agreed that I would limit Kody’s activity as much as possible, knowing that more rest would give him the best chance of recovery.

The crate wasn’t really an issue.  When Kody is in the house, he spends nearly all of his time on the couch.  He doesn’t move around much at all.  As it turned out, as long as both Gator and I were home, we were able to keep Kody in the house with one of us while the other one went out to feed horses and chickens.  However,  Gator was leaving for work at 5:00 AM at least three days a week and there weren’t many days that he would get home from work before dark, so the tag team method didn’t get used nearly as much as I would have liked.

I tried just leaving Kody in the house while Carly and I went out and did chores for the first week or so.  It was one of the most miserable weeks I can remember.  He howled like he was being tortured!  I could hear him all the way down at the barn.  I’m not sure how much running around he did, but I can say that he wasn’t staying on the couch because he would be standing at the door panting the second we came back in.

Clearly, that didn’t work.  Next, I tried leaving both of them in the house.  Not much better – I had two howling dogs.  It’s funny, because when we leave them to go out to dinner or something, they are just fine.  But they know when we are here on the property, and they don’t appreciate being stuck in the house.

After a couple of weeks, Kody had improved enough that I let him go out with us as long as he didn’t run.  He quickly learned the “don’t run” command and was really very good about it, especially since Carly did everything she could to get him to run and play.  Actually, Carly was suffering much more than Kody during this ordeal.  She had lost her running buddy and was not happy about it.  The worst part was that even though Kody was now allowed to go out with us, I wouldn’t throw the squeaky anymore.  There was just no way to keep Kody from chasing it, so it was off limits.  Carly was devastated.

We took both dogs back in when it was time to check on Kody’s progress because they each needed vaccinations. Kody had improved a lot.  Still not great – he will still need to keep his activity in check, however the vet said that moderate exercise will help with the arthritis.  He had gained a couple of pounds, so we were instructed to get them off because any extra weight would just aggravate it. When Carly got on the scale, I got the shock of my life.  She had gained 12 pounds!! 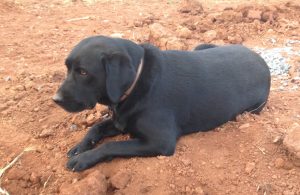