The new chickens have arrived and are settled in.  We got four pullets (8 week old chickens) to build up our flock which had gone from four to two.  The two older chickens are three years old now, so they are well established and didn’t appreciate the new upstarts showing up.  The new chickens were confused, scared and didn’t appreciate the older ones bossing them around.  We tried to keep them separated for a few days so that the new chickens could get settled in, but we don’t have two separate chicken coops and we found that containing four chickens for several days without a proper coop is just about impossible (see chickens in the barn rafters, below). 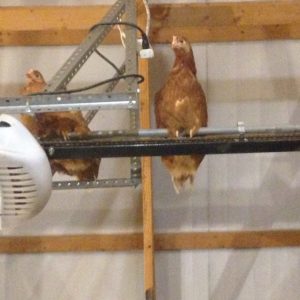 We finally gave in and just put them all together with the hope they would all work it out.  To ease the tension, we kept the new chickens in the coop for a couple of weeks and let the older ones out during the day, which was their routine.

Marilyn, one of the older hens – and the only one that is still laying eggs, went into full protest mode.  She refused to lay her eggs in the nesting boxes anymore and resorted to laying them in a corner of our hay storage area in the barn.  Although that doesn’t seem like it should be an issue, Hazel, our barn cat had a big problem with  it!  Suddenly, she started guarding the hay and would chase Marilyn out of the barn whenever she would go in to lay her egg.  There was an awful lot of squawking going on.  Marilyn, refusing to be deterred, just kept on trying to get into the barn until Hazel either lost interest in chasing her out, or was taking her daily nap.  After about a week of this, Carly, our adorable Lab, realized that every day there was an egg on the floor in the barn and she soon began racing down to the barn to see if she could retrieve it (and eat it) before I got down there to pick it up.  REALLY Marilyn, can’t you just lay your eggs in the nesting boxes???  Apparently not.

After about two weeks, I decided that the new chickens would be bonded with the chicken coop and know that it was home, so I started letting them out during the day. 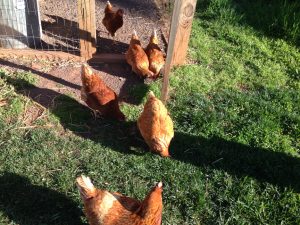 Getting them back to the coop those first few days was a challenge.  Gator got pretty good and walking around the yard with a long stick herding them back home.  After about a week, they started to learn the routine and they now come running when I call them in the evenings.

Now that we’ve had them a few weeks, everyone is getting along just fine.  Marilyn is still laying her eggs in the barn, but she and Hazel seem to have worked out a truce.  I have to keep an eye on Carly – she continues to run down to the barn to look for eggs.  The new chickens have started laying eggs too, and thank goodness, they are laying in the nesting boxes! 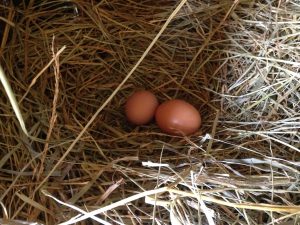