My two horses, Banjo and Max, have been together for a couple of years and even though I do a lot to separate them and get them used to being alone, they are growing increasingly attached to each other.  Since we have room in the barn and we were adding more pasture, I thought maybe it would be good to add another horse to the mix. But because we were late getting the new pasture fenced and winter was quickly approaching, I figured it would be best to wait until spring.

We did a lot of planning of the layout of the barn and the adjoining fields and it has been nice to be able to leave the stall doors open to the outside so the horses could come in and out as they pleased. For the most part, they stay out except to come in for feed twice a day and occasionally to get out of the rain.  Banjo has always been the herd leader. No matter where we’ve kept him or how many horses have been in the field with him, Banjo has been dominant.  He mostly doesn’t have much to say, except when someone gets out of line, although he does seem to get quite attached to the youngsters. He’s always been an “old soul” and you can definitely see it in the way he interacts with other horses. The only thing Banjo has insisted on is to be able to have first pick as to which stall he gets at feeding time.  I quickly discovered that if I didn’t want to spend a lot of of time arguing about who goes where, I could just let Banjo pick his stall and Max would take the other one. 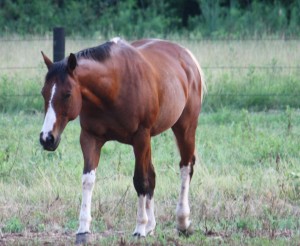 Max is 10 years younger than Banjo and he has always been kind of a brat.  It is really kind of surprising how tolerant other horses have been of Max. In spite of the fact that he pesters older horses constantly, they always have taken  it in good humor. With younger horses, Max has been the ring leader, making up games and getting them to race around the field together. He seems to get along with nearly every horse, but yet he is always causing trouble. 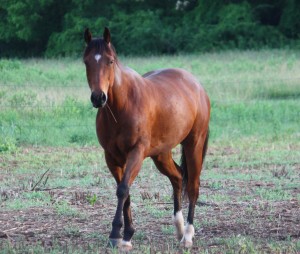 Enter Bob. Bob is a five year old Quarter Horse – just a year younger than Max.  His former owners are good friends of mine but due to declining health, they were just not able to care for several horses through another winter. I have to admit, even though I had thought about getting another horse, Bob wasn’t what I had in mind. He is wonderfully bred but not the lines I was looking for and he is taller than I really wanted. Bob wasn’t started under saddle until the fall of his three year old year and hasn’t had a lot of consistent training since then, so he is pretty green.  I was thinking of a more finished horse if I was to get another one.  Oh well, none of that matters because when I got the call asking me to take the horse, I knew it was the right thing to do. 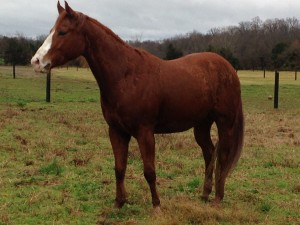 Gator and I were quickly able to get a small field fenced in before we brought him home right before Christmas and luckily the weather continued to stay mild through New Years so that we could get a much larger field fenced in.  Bob had never been turned out with other horses, so we knew that would be a challenge. He had no idea how to act in a herd. We started him out in the small field by himself for a couple of days, then moved him out in the bigger field with Banjo where he did just fine. Next, we put him out with Max. Bob wanted no trouble and was more than happy to be at the bottom of the pecking order – oh boy, did Max ever take advantage of that! Max became an instant bully, deciding he was going to be the lead horse in the herd.

We finished fencing in the third and largest field (about 5 acres) and were able to turn all three horses out after a couple of weeks of rotating them around between the two other fields. It has been fascinating to watch the new herd dynamics. It is often said that adding a single horse to or taking one away from a herd will change the order, but this is the first time that I’ve been able to see it in action. Max is working very hard to establish himself as herd leader – he’s working way harder than he needs to. Banjo just doesn’t seem very interested in running the show any more and Bob is happy to follow everyone else’s lead. Max, however, spends a lot of time every day just moving Bob around and letting Bob know that he is in charge. Max doesn’t boss Banjo around much – he’s discovered that Banjo will tolerate it for a little while but then he loses his patience with Max. I guess because we have a small herd, this time s a good opportunity for Max to practice his “leadership skills!”

Now that we’ve had Bob for a couple of months, things are starting to settle down a bit.  He and Max are actually getting along quite well. We still have occasional scraps but Max isn’t such a bully anymore and Bob is figuring out what it means to be art of a herd.  Banjo and Max are still very attached and now Bob is just as attached to both of them, but at least I’ve got three fields so that I can separate them. I’m really looking forward to daylight savings time so that I’ll have a little more time in the evening and I can get all three of them back to work!