One of Gator’s many projects this summer and fall has been to do some clearing.  It is amazing how fast weeds and trees will grow up in any areas that aren’t continually mowed or plowed.  Late this summer as he was pulling out old bushes and volunteer trees that had grown up and out of control at the edge of the yard, Gator found some of these burrs. 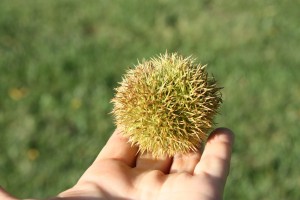 Let me say, those little spines are sharp!  Eventually we found some burrs that had dried out and opened up and we were thrilled to see that we have a chestnut tree! 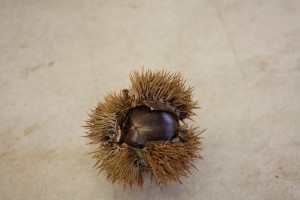 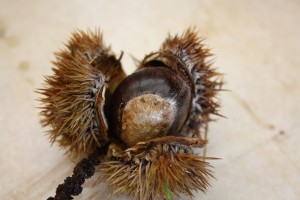 We were particularly excited about this discovery because one of the interesting things about our house is that our kitchen cabinets and flooring in our family room is made from wormy chestnut wood. 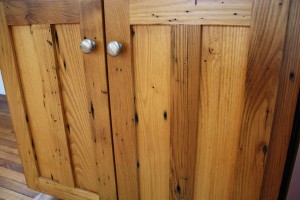 Never heard of it? Neither had we, but after doing some research, we learned that a blight wiped out nearly all of the American Chestnut trees in the early 1900’s leaving the wood damaged by scarring and worm holes.  Wormy chestnut wood has not been harvested since the 1920’s or so when virtually all of the chestnut trees east of the Mississippi were cut down to stop the spread of the blight.  Now the only remaining wood from those trees available is reclaimed from old houses or barns.  Our cabinets and flooring came from an old cabin that the former owners of our house had bought and disassembled.

But I digress.  After reading up about our wormy chestnut cabinets, we knew American Chestnut trees haven’t been able to make a comeback here in the East because they are usually killed by the blight before they are 10 years old.  As it turns out, there are currently fewer than 100 American Chestnuts that have reached maturity in the natural range in the Eastern US. 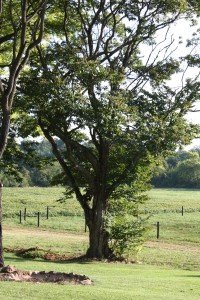 I was suspicious.  The trees on our property haven’t been really well cared for and I knew that the odds were against a tree like that surviving without a lot of care and maintenance.  This tree had been ignored for years.  It had dead limbs, shoots growing out of the base – and when we opened some of the nuts, they were full of weevils.  More research.  What we have is not an American Chestnut tree, but a Chinese Chestnut tree.  Not rare but still kind of unusual.  There aren’t a lot of them around, yet they are much hardier than the American Chestnut and are resistant to the blight.  I also found out that the weevils come out of the chestnuts once they open up and go into the ground only to reemerge as beetles in the spring which lay eggs into the developing burrs.  That problem can be solved by picking up all of the burrs as soon as they fall and burning them to stop the life cycle of the weevils.  It may take a couple of years, but with some care and maintenance hopefully our chestnut tree will be thriving once again!