Spring is on the horizon and I, for one, will be glad to put winter behind me. We’ve had some crazy weather, from an extremely cold January to a very wet February to horrendous winds this month.  Our old trees are taking a beating and we have lost branches from most of them.  The oldest trees are hollow and just crumble in the high winds. 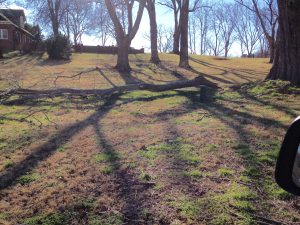 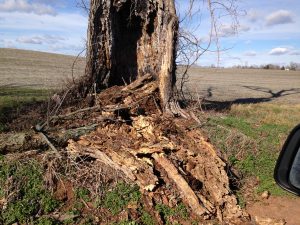 At least we didn’t lose power or have any damage to any of the buildings but this is getting old and I’m ready for some nice weather!

We also suffered another huge loss this winter.  Both of our beehives died.  Gator and I were devastated.  As I posted last fall, we had our “bee mentor” come out and inspect the hives with us.  He was confident that we had two good, healthy hives with lots of honey to get the bees through the winter.  As we found out from the state apiarist (aka head bee guy) at the Virginia Department of Agriculture, the bee losses in Virginia this winter have been “alarming.”  Two main factors appear to be the major causes.  First, we had several weeks of very cold weather early in the winter.  The cold causes the hives to contract and cluster to stay warm.  Well, it was so cold that the bees on the outside of the cluster couldn’t get to the honey to bring it back before dying.  Even if the hive had enough honey, if it wasn’t right where the cluster of bees was, the hive could still starve or be significantly weakened.  The other factor that was discovered was that the deadly varroa mite population has exploded.  Normally, it is recommended that first year hives not be treated for parasites because it usually takes a year or so for them to become a big enough problem to justify using pesticides in the hive to control them.   We hear so much about pesticides killing bees, but most people don’t know that nearly all beekeepers use pesticides to save their bees.  It’s a delicate balance, and it will be interesting to see what the recommendations will be this year to control parasites on bees.  We will be starting over this spring with new bees.  We have lots of honey and comb that we were able to salvage, so hopefully that will give the new bees an extra boost.

We also have four new chickens coming next month.  We are down to two chickens and they are three years old now so we decided it was time to supplement the flock.  Only one chicken was still laying eggs last summer and she stopped in the fall which forced me to have to buy eggs this winter.  Even the organic, free range eggs from the grocery store can’t compare to home grown eggs from my own chickens – they just don’t taste as good.  The week after I ordered and paid for my new chickens, she started laying again!  Hopefully when the new chickens arrive and start laying, we’ll have so many eggs, we’ll be giving them away again.

I have also gotten my garden started.  That always gets me excited for spring!  I’ve started heirloom tomatoes from seed again, along with jalapeños, bell peppers, eggplant and herbs. 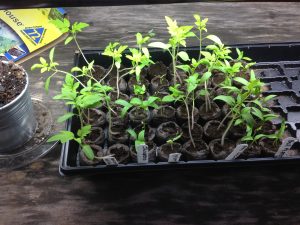 I’ll also be planting, lettuce, spinach, sunflowers, lavender and numerous other herbs.  Since I have two gardens, I almost always have extra space, so I’ll just have to see what the local garden center has that I can use to fill in.

We just have to get through the next couple of weeks and spring will come with it’s new beginnings!