Food From our Farm

Although we have been spending the majority of our time concentrating on getting the horses home this summer, life has continued to carry on at breakneck pace.  I just need to sit down and get you updated on everything that is going on!

We are starting to reap the benefits of some of the projects that we started this spring.

The chickens are doing great. They have become so friendly and are now laying eggs. 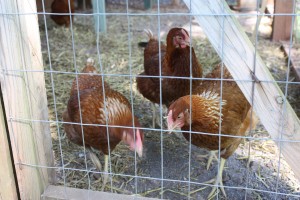 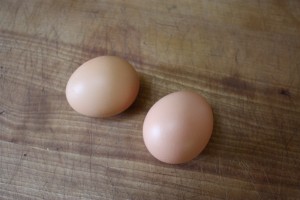 We get about 2 dozen eggs a week which is a lot more than we can eat, so we have started giving them away.  I’m really surprised how easy the chickens are to care for.  I got them because I wanted the eggs but they are such a joy – I’ve really gotten attached to them!

Wild raspberry season is only a few weeks long and we all but missed it due to our travels.  However, our neighbor had been spotting all the best raspberry patches on her horseback rides through the neighborhood.  One day, she and her cousin were out on their horses picking raspberries in the pouring rain so they could make pies (now that’s dedication!).  They had more raspberries than they needed and we had more eggs than we needed so we were able to trade raspberries for eggs.  You just can’t beat a deal like that.

The garden is going gangbusters.  I wasn’t too sure how it would work out because it doesn’t get full sun all day.  There is not one spot in our yard where it is flat, gets full sun and I can get water to it.  So I settled for morning sun, close to the water supply and Gator solved the problem of being on a hill.  I went a little overboard with the pumpkins and tomatoes and the garden went from this 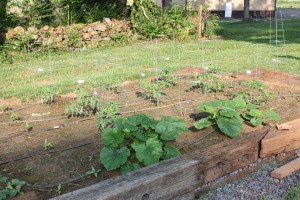 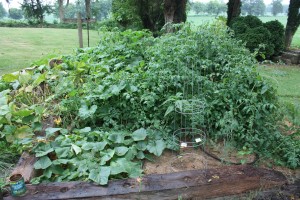 in just a few weeks.  I’ve also got cantaloupe, and several kinds of herbs and peppers.  I haven’t had time to even walk out there, so I sure was surprised to see a jungle!  Next year, I’m either going to plan on fewer plants or more garden.  I’m going with more garden…

We’ve also got a volunteer peach tree, which legend has it goes back to the 1960’s.  According to the story, the grandmother who lived in the house at the time, would eat peaches and throw the pits out the kitchen window.  This is the last of four trees that grew up from those pits. 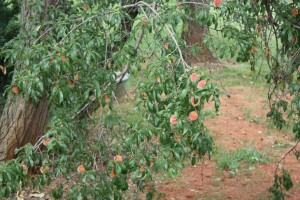 Frankly, I believe the story because nobody in their right mind would plant a peach tree 6 inches away from a maple tree on purpose!

Speaking of volunteers, this is our sole cornstalk. 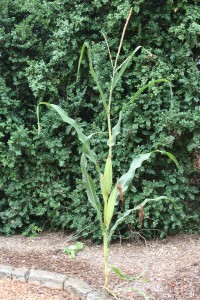 This showed up in my flower bed this spring and since the farmer who leases our land planted soybeans this year, Gator thought we ought to let it grow.  Who says men aren’t sentimental?  It’s field corn, so maybe the chickens will like it.

Add to all of this the walnuts that we will have this fall and it looks like we are going to be eating pretty well!