Crisis in the Hive

We have an amazing beekeeping mentor who has been so helpful in making sure that we don’t go into the hives too often, yet often enough to detect problems soon enough to take corrective action. Every time a hive is opened, damage is done to the comb and usually several bees are killed.  At the very least, it is disruptive to the hive.  We specifically planned to open the hives and inspect the frames three weeks after we installed them, giving the queens enough time to get established and start laying eggs.

On the designated day, our mentor came over right after work so that a lot of the bees would still be outside.  He showed us how to properly smoke a hive, which calms the bees down and how to get the hive top feeder off the hive with a minimal amount of damage. 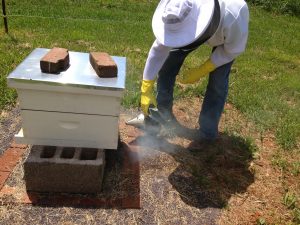 Once we got the first hive open, our mentor immediately knew something wasn’t right.  First of all, there weren’t enough bees.  By this time, the hive should be growing and the bees should be drawing comb on 5-6 frames. 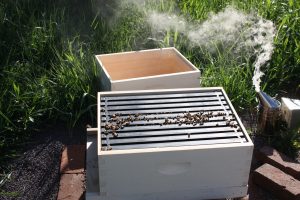 When we pulled a frame out to look at it, his fears were confirmed – no queen. 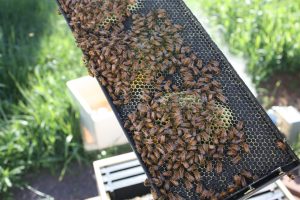 How did he know that by looking at this first frame?  I certainly couldn’t tell, and I didn’t know what to look for.  This is precisely why all of the first year beekeepers in our class were assigned mentors.  We would have questioned why there weren’t more bees, but we didn’t know enough to figure out we had lost the queen.  By the time we would have realized that, the whole hive would have been dead.

OK, back to the frame.  It’s hard to see in the picture, but the comb is very uneven and there were several eggs in many of the cells.  What this told us was that because there was no queen, the worker bees were laying eggs and they are only able to lay drone eggs and drone cells are bigger than regular worker bee cells.  Usually there only a few of them on a frame – off to the side or at the bottom.  These were all through the frame.

Now, what to do?  Well it all depended on how things looked in the second hive. 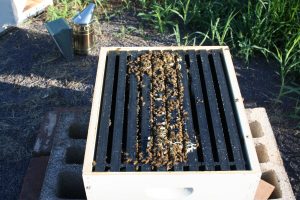 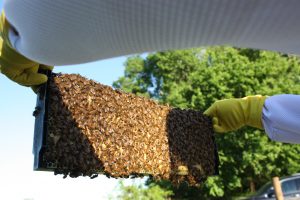 As you can see from these pictures, things look a lot better.  Not as many bees as our mentor had hoped for, but we found the queen (the supplier marks the queens with a colored dot on their backs for easy identification) and she was busy laying eggs.

The healthy hive gave us the best option for saving the queenless hive.  We took a frame from the healthy hive that had newly laid eggs in it, making sure not to take the queen with it, and moved it to the queenless hive.  The idea here is that there are good, healthy worker bee eggs in the frame and the bees would grow a queen from them by feeding some of them a special food. It is a slow process and at best, this hive will be a full month to six weeks behind the other hive, but if all goes well, we will get this hive thriving and built up enough to get through next winter.

At this point, there is not much we can do but wait.  In a couple of weeks, we will check both hives again. In the first hive, we will look to make sure there are queen cells developing and in the second hive, we will be just making sure that it has recovered from losing a whole frame full of eggs.