It’s been about three weeks since I planted my first seeds and they are coming up!  I’m working on both flowers and vegetables, so I’ve got over a hundred seeds started now. The previous owners of our house enclosed the old patio in glass, so it gets plenty of sun and works great for a greenhouse and Gator set up a nifty shelving system with grow lights for me, so I can handle a lot more trays than I used to. 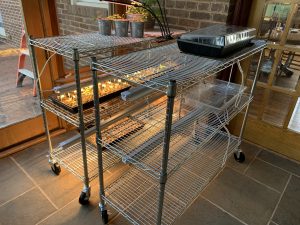 Some of the seeds were a little more of a challenge to handle and get planted than others – especially the flowers.  For example, the begonia seeds came in a tiny little capsule, and there were only 25 seeds.  So I got out my tweezers and set each tiny little seed in a pot. 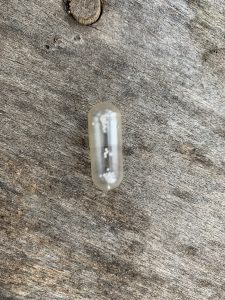 I wasn’t very hopeful, but all but all except a couple have come up.  They are growing slowly, but seem to be doing well.

The tomatoes on the other hand, have popped right up and are growing like crazy.  I’m taking a new approach to growing tomatoes this year.  The past several years, I have only grown heirlooms but most (or maybe all) heirloom tomatoes are indeterminate – which means that the plant keeps producing as long as it is alive.  The problem for me was that I was never getting a lot of tomatoes at one time for making salsa or canning.  This year, I’m going to grow some Celebrity tomatoes which are a hybrid and produce all of their tomatoes at once,  so I’ll be able to pick a lot at one time for canning and making salsa.  Then I’ll also have some heirlooms for eating fresh.

As you can see from the picture, I’ve added little flags on each plant.  Another thing I’ve learned is how easy it is to get the varieties mixed up as I move them around and get them hardened off to plant outside.  Somehow, last year I ended up with four Yellow Pear tomato plants in the garden.  They are wonderful, but they’re tiny little tomatoes and each plant produced hundreds of them!  At least I’m learning from my lessons…