One of the concerns we had about buying this place is that in spite of the fact that there is plenty of acreage, there is no barn (nor pasture) for the horses. After all, that was the whole point of moving to the country. We decided that instead of having to drive somewhere to do everything fun that we liked to do, we should find a place where we could have all that at home. Glenmore meets most of that criteria, but getting a barn built has been the number one priority since moving here.

The first step in the process was to figure out where to put it. Most of our land is leased to a local farmer who had corn planted when we moved in. We wanted to encroach as little as possible on the portion of land he had planted but we needed a relatively flat spot that was high enough to have good drainage, not too many trees around, able to be seen from the house – wow, so many things to take into consideration!  One thing we figured out pretty quickly was that we wouldn’t be able to see the land well enough to find the right spot until the corn came down.  So we waited.  And waited.  Finally, one day in the middle of December, the farmer came and cut down all of the corn.

In the mean time, there was plenty to do.  We had to choose a design, figure out the budget, go back and redesign to fit the budget (multiple times) and find a contractor.  We also visited several of our neighbors barns.  We have boarded our horses for many years, but what works well for a boarding facility doesn’t necessarily work for a private barn.  By the time the land was cleared of crops, we were ready to get it all laid out and start construction.    The only problem was that is was now winter and we were right in the middle of the holidays.  Luckily, our contractor doesn’t let a little cold weather interfere with work and was able to get dirt work done by the middle of January.  Our barn was underway! 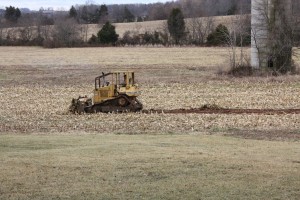 Before we knew it, holes were drilled, posts were placed and walls were going up. 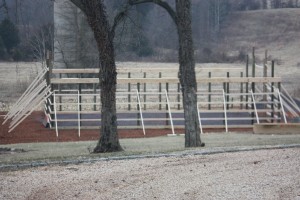 Due to a stroke of luck, two crews were able to work and within a week, the roof was on! 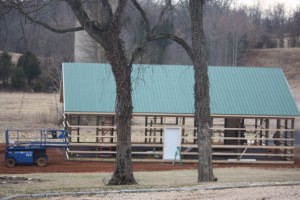 Although the pouring of the concrete was held up for about 10 days due to extremely cold weather, work has progressed quickly since then and by the middle of March the barn was mostly completed. 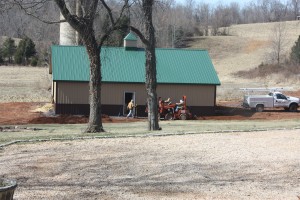 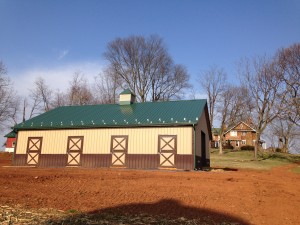 The plumbers and electricians still have their work to finish on the inside, and Gator and I are going to finish out the tack room ourselves, so there is still plenty of work to do.  We also have to get the gravel for the driveway, have the riding arena finished and get fencing in.  There is still SO much work to do!

I will keep you posted over the next several weeks as progress continues!