After we finally got the old chickens to accept the new chickens, we thought that we were in the clear.  Mother nature had other things in mind, however.  A few weeks ago, a fox managed to dig under the chicken coop and got in and killed three chickens – one older one and two younger ones.  A few days later, my last older chicken died.  She didn’t look like she had been injured, but all of the chickens that survived were severely traumatized.  They stopped eating, quit laying eggs and hid in the henhouse day and night.

Gator and I knew that as long as we still had live chickens, that fox was going to come back, so although it was pouring rain, we spent the next day digging a ditch around the coop and filling it with bricks.

Additionally, we put chicken wire extending down into the ditch and covered it up with dirt.  The fox came back the very next night!  It wasn’t able to get in, but it did dig up some of the chicken wire.  That sent Gator on the warpath.  No fox was going to get our chickens a second time! He found some old steel pipe that was left behind on the farm and laid it around the edge of the coop in some stone dust. He also set a live trap, but so far we have only managed to catch our little cat, Hazel.   Carly has been on high alert as well, and has been waking us up nearly every night to let her out so that she can chase off any critters that happen to be lurking around.   We have seen signs of the fox a few more times, but it hasn’t managed to get into the coop again.

Since I was down to two chickens, I decided to get some replacements right away.  As long as they were out of sorts, I figured a little more upset to the delicate balance couldn’t really make things much worse.  I found a chicken swap here locally – I know, you are thinking, “a chicken swap????”  Yep, it’s like a flee market for chickens.  A bunch of people who have chickens they want to sell all meet in a parking lot and people like me who want to buy them, show up and shop!

I found three young pullets (in between a chick and a full grown hen) that are supposed to lay different colors of eggs (AKA Easter Eggers).  At this point, I figured I might as well try some different chicken breeds and see what happens. 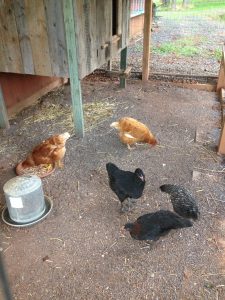 Now we have two brown chickens and three black ones.  Oh and by the way, the brown hens did not appreciate the intrusion of the new chickens.  The delicate balance had been upset once again.  It didn’t help that weren’t leaving the coop during the day, so they had to deal with the new chickens 24/7.

Things always seem to get better with time, and this has been no exception.  All five chickens are getting along fine now and are venturing out of the coop during the day.  The brown chickens have started to lay eggs again and hopefully the black ones will start laying in the next month or so.  We’re still seeing signs of the fox about once a week, but Carly heads out every night about midnight to do her patrolling and has managed to keep everyone safe!