Gator and I have managed to keep two dogs for the past 18 years.  After we got Kate, our “first” second puppy, we realized how much training goes on from older dogs to puppies.  Since then, we agreed that we would get another dog every 6 years or so.  It hasn’t turned out exactly every six years, but we have continued to have one older dog and a younger one.  Now we have Kody, who will be turning 11 this year, and Carly who just turned 7.  Last year, we started talking about the next generation, thinking the best time to get a puppy would be after our vacation in May.  I have to admit, I was the one who put the brakes on it.  I just couldn’t figure out how I was going to manage a third dog during my busiest time of year at work and while I was trying to commit more time to competing with my horse.  Don’t get me wrong, it’s not all on me but since I work from home and Gator doesn’t, puppy duty during the daytime is mine.  Once we got into the fall, it didn’t get any more convenient because we had company over the holidays as well as travel plans, so I figured we’d think about it again in the spring and see how things looked.

All that changed when right before Christmas, Gator saw a flyer for Labrador puppies at our local co-op that said they would be ready to go to homes in early January.  We had already decided that we would get another black lab and we wanted a male, and the flyer said they had only one black male in the litter.   I could tell Gator wasn’t going to let this go and I know I overthink and then talk myself out of things, so I took a deep breath called the number.  No answer and no voicemail.  So I called again.  And again.  After calling four times over the course of a week, a guy finally answered the phone and said that he hadn’t answered because he didn’t recognize the area code from my number.  Once we got past that, I asked him about the black male puppy and he said he thought he was going to keep that one.  Since the puppies weren’t going to be available for another week, he said he’d call me back the following Sunday to let me know for sure if he was going to keep the puppy or not.  The next Sunday came and went with no call.  Finally on Tuesday, I called him back and he said he hadn’t made a decision yet because not all of the other puppies had sold.

My gut told me this wasn’t going to work, which was disappointing since I had been really getting excited about the idea of getting a puppy (it doesn’t take much!).  So it was just the motivation I needed to see what else was out there.  As it turned out, a breeder in Maryland had two black males left in a litter and they were 13 weeks old, so she had them discounted because they were getting older.  I gave her a call (she answered right away) and we had a wonderful conversation.  Things were falling into place!

I called Gator and we hopped in the car that evening after work and drove to Maryland.  I’m sure you know the rest of the story – who goes to look and puppies and doesn’t come home with one??

We have one sweet little guy!  This is Jordy. 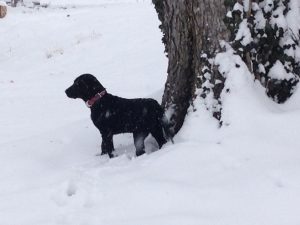 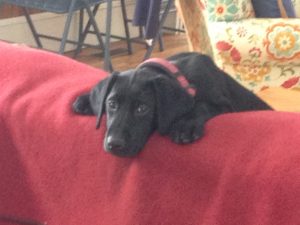 Now we have the next generation – and no room on the couch! 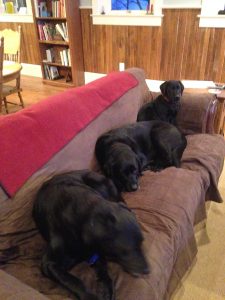