The Year of the Dog

According to the Chinese calendar, this is the year of the boar. I beg to differ. At Glenmore, this is definitely the year of the dog – or more correctly, dogs.  The year started with Jordy joining our family.

We’ve had a lot of puppies over the years, but I seem to have forgotten how much energy they have!  Jordy is no exception.  He is a busy guy.  Thank goodness he has a big farm to run around on.  I’m not sure things would be going so well if we were still in town with a fenced in yard.  He is the quintessential Lab – so enthusiastic!  He has been the perfect playmate for Carly, happily taking everything she can dish out and coming back for more.  Kody was just as happy because it gave him a break from Carly! 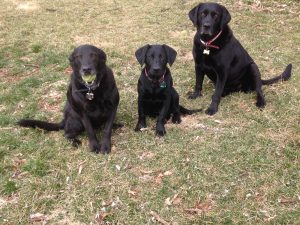 Carly and Jordy have been quite a pair.  In June while we were out one evening, Jordy managed to break out of his crate and steal a bottle of Previcox (Kody’s arthritis medicine).  Being the dynamic duo they are, Jordy got it off the counter and opened the bottle, then Carly pushed him out of the way and ate it all.  The poison control hotline wanted to assume that all three dogs had eaten all of the the doses.  Oh no, I knew better than that.  Kody wanted no part of it – he probably never even got off the couch.  Jordy may be the counter surfer, but he’s no match for Carly when it comes to eating.  As it turned out,  the first thing in morning we had Carly at the vet’s office – she was sick.  Really sick.  It was a full week before she could hold any food down. 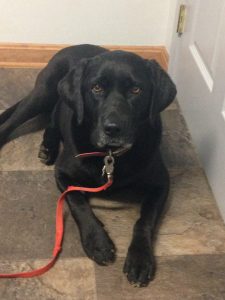 Just about the time she was back in action, Carly came up lame.  After a several trips to the vet, x-rays and many weeks of rest, we determined that she was going to need surgery.  I had heard that the recovery from knee surgery in dogs was difficult, but I had NO idea.  Let’s just say Carly is not the ideal patient – she is not used to a crate and had never been left alone.  Things might have been different if we didn’t have Jordy to contend with, but he didn’t understand that not only could Carly not play with him anymore, she couldn’t even walk unassisted.  For the first month after the surgery, Carly had to stay in a crate 24/7 –  she didn’t like it one bit and made it perfectly clear.

Since Jordy was separated from Carly, he had to find something else to occupy him, so he turned his attention to Kody.  Kody has never been very social.  He would have been perfectly happy being an only dog, and really wasn’t thrilled when we got Carly.  He learned to love Carly but when we got Jordy, it was pretty apparent that at 11 years old, he didn’t have feel obligation to bond with a puppy.  Jordy, however didn’t know (or care) about any of that – he just needed someone to play with!  He pestered Kody incessantly until finally we started noticing them playing together.  Kody didn’t have much patience at first and Jordy has learned that he can’t play as rough with him, but as the weeks have gone by, the two have become close buddies.

Carly is almost fully recovered from her surgery and although she can’t run outside off the leash yet, she doesn’t have to be in the crate anymore in the house.  It’s been interesting to watch her as she inserts herself into play time with her brothers.  She really gets her feelings hurt when she is left out of their play!  It’s a whole new dynamic between those three – I will be glad when things settle down and we can focus on other things.  Next year is not going to be the year of the dog – I think maybe it should be the year of Mary.